While there have been high profile deaths by suicide this past year, there are some statistics that help us understand a little about people who are in distress. 78% of the people who die by suicide are male. Suicide is now the 2nd leading cause of death in people 10-34 years old. And, perhaps most importantly, thoughts of suicide are a symptom of another mental health issue. And symptoms can be treated.

This year, #Together4MH is the Suicide Prevention Week goal. It asks that we not only be aware of those around us who may be calling for help, who may be overwhelmed and who may be considering suicide, but that we reach out to them to see how we might facilitate getting help. 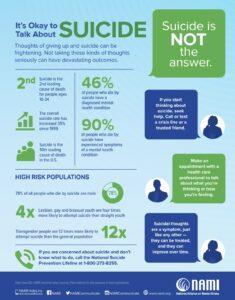 There are risk factors for people who may be thinking of suicide. While these are not predictive of what someone might do, Suicide Prevention Lifeline urges us to be aware of factors that may cause someone to be at a higher risk.

New behaviors or changes in behaviors associated with a painful event, a loss or a life change can include some of the following:

Suicide is not inevitable. There is hope, and there is help. It starts by talking about suicide with the person who concerns you. Reduce their access to the things that may be used for self-harm. Follow up with them often. And most importantly help them find supportive services.